Celebrating the Balance of the Divine Feminine and Divine Masculine

Greetings in this merry month of may

We just passed the Celtic festival of Beltane. Beltane is a Celtic Fire festival that falls directly in between the Winter Solstice and the Summer Solstice. Children and adults weave masculine and feminine ribbons around the May Pole. The Goddesses of Beltane are Artemis, The May Queen, and Mother Earth Herself; Gaia. The Gods of the festival are Pan, Green Man, Stag King, Dionysus and Bacchus. This holy-day is still celebrated throughout the British Isles with raucous drink and sexuality. In the ancient myths, it is the one night of the year when young people can couple with someone other than their spouse or partner. My own tribe is older and we live in upstate NY so perhaps, not the raucous energies of youth, but we can still express our gratitude for the fertility of Father Sun impregnating Mother Earth so that the plants, flowers and crops will grow and for the honey bees fertilizing the flowers. Nature shows us the balance of the masculine and feminine in all of life. The changing of the seasons teach us about the cycle of life; birth, life, death and rebirth. Over and over again. Something we don’t get with our linear minds and our mechanized, technological world.
Here is how my local Beltane Celebration unfolded.

We gather at our beloved Still Point, an interfaith retreat center near

Saratoga Lake for Beltane.  Unlike my idealized vision of May day warmth and sun, it is chilly and cloudy. Our spirits, however are high and our hearts are open. Many are curious, having never celebrated or even thought of Beltane, but were willing to engage in the festivities.
We light the sacred fire to warm our bodies and souls. Sarah, who graced us with a fire ceremony has a deep relationship with the fire, the wood and is sure to offer it the proper nutrition of wood, herbs and oils. 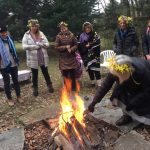 Everyone has a role like welcoming people through the gateway of Beltane, purifying our energy fields with sage smoke, making flower crowns, bringing honey, and baking oatcakes. Oatcakes, or Scottish bannocks, were a traditional breakfast on Beltane morning, consumed to guarantee a wealth of crops for the new growing season. The round shape of the cakes are meant to represent the sun and its generous spirit. We eat the oatcakes and say out loud to the circle something we are grateful for in our lives. We hear each other’s blessings being spoken. We pass the chalice of honey wine and drink deeply of this elixir of life.
It is a bittersweet event. Some of us recently learned that our beloved Rowena, one of the staff people at Still Point had received news that her cancer was untreatable and she had only a few weeks to live. She had hoped that radiation and chemotherapy treatments would help but they did not and surgery was not an option. We had to announce this sad news. Most of the participants have been coming to Still Point for years for various programs and everyone knows Rowena. Her big, generous spirit fills the place with joy and she manifests the Divine feminine herself in the form of Great Mother and the fierce, Primal Goddess as she rides around on a huge lawn mower, chops wood and takes care of the grounds and everything else that’s needed. She told me that since she came to Still Point ten years ago, she allowed Grace to flow through her to do whatever she had to do.
So there was sadness. It was also a clear reminder of the cycles of life; of the seasons and our lives. We are born, grow up, are adults, grow old and die. Spring, Summer, Fall, Winter.
And so, even as the Spring maiden is with us, so too is the Queen of Death, who teaches us the art of letting go and entering into the unknown. She who leads the descent within. 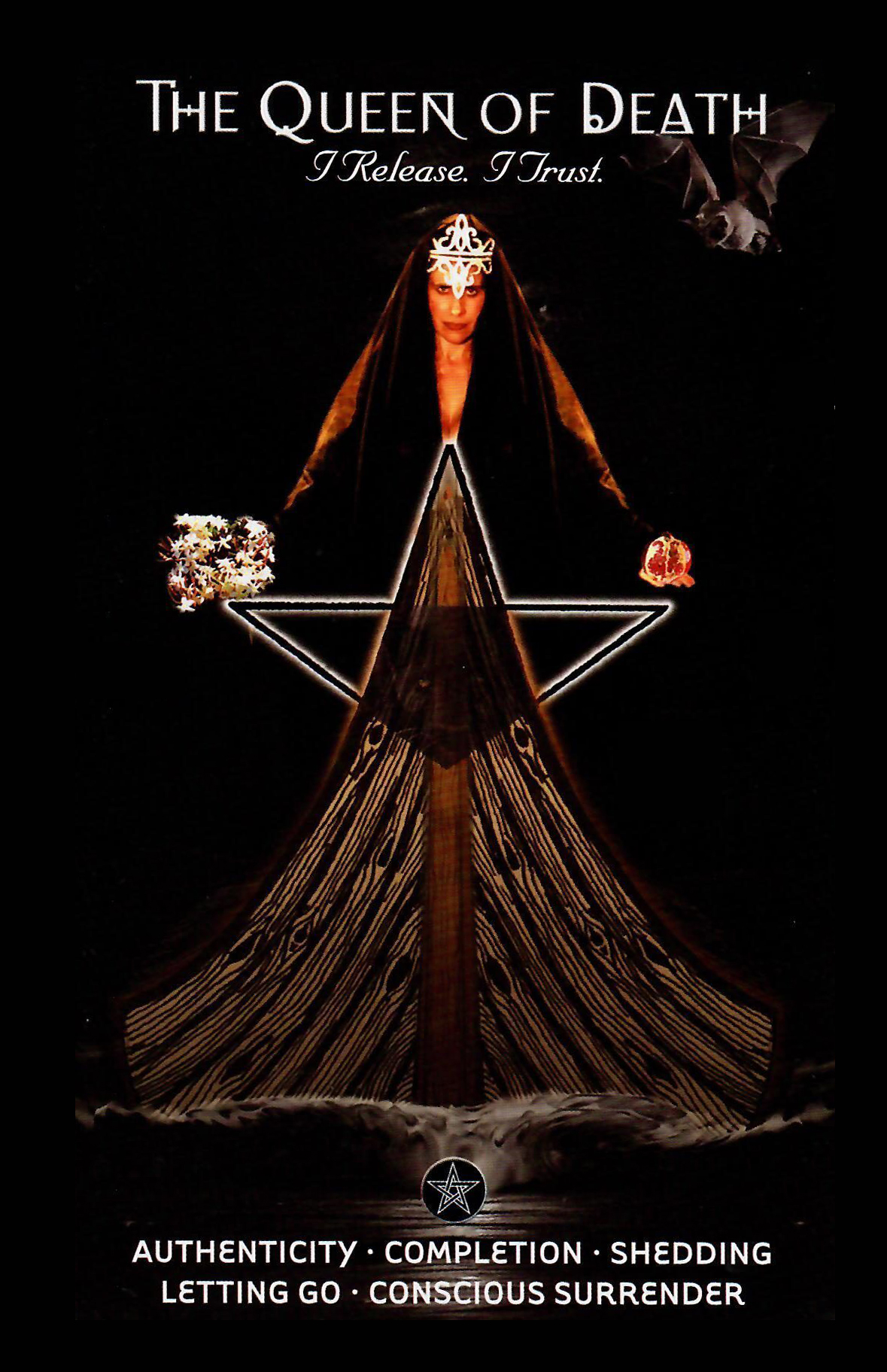 This aspect of the Goddess acknowledges and empowers through composting the illusions of the ego. She unmasks and unveils, stripping the ego of its illusions and thus dismantling the false self. Here are a few of the myths that live in our collective consciousness:

• Innana, Queen of Heaven (Sumerian) descends to the Underworld to meet her dark sister Ereshkigal, who rules there. On the journey she passes through seven gates, and Ereshkigal’s servant meets her at each one, demanding that she give up a piece of her royal wardrobe at each gate until the humbled Innana arrives fully naked in the Underworld.

• Persephone (Greek): Persephone is the daughter of Demeter, goddess of the crops. One day she is abducted by Hades, God of the Underworld to be his queen. She eventually escapes, but because she ate a pomegranate seed during her imprisonment, she is sentenced to spend one third of each year in the underworld. Her mother mourns during this time, which corresponds to winter and the fallowness of fields.

I know it is possible to hold both joy and sadness, both life and death in our ritual
and so we made the announcement, said a prayer for Rowena and continued on as she would want us to do.
We set our intentions for this potent, fertile time, blow them into sticks and place them into the fire to transmute and send them up to spirit. None of us ran off into the bushes with a young Stag King (dang!) but Frank led us in a dance of Innana and Damuzid and we danced and felt both the divine masculine and feminine energies flow through our bodies.
After honoring all of the directions; east, south, west, north and the elements; air, fire, water and earth, we shouted a big Harrah! and set off into the Welcome House for good food and fellowship. After a long, hard winter, many deaths and natural disasters, it was good to gather together to celebrate life!

Lin is a Priestess who creates meaningful and joyful ceremonies and rituals.
She is a celebrant and enjoys helping couples plan their wedding ceremony
and performing the ceremony. She also holds the space for other rites of passage such as birth, coming of age, divorce, moving into a new house and memorial service.

We are experiencing a global shift that mystics through the ages have predicted:
The return of the mother and the rise of the sacred feminine,

We will work with a different Goddess archetype each time:

We will explore how they live in us, in both their light and shadow qualities.

In this circle, you will:

We will begin September 2019
six sessions
6-8pm
Where:  Saratoga Springs.  Place to be determined
Investment:  $198
If you feel called, please e-mail or call me